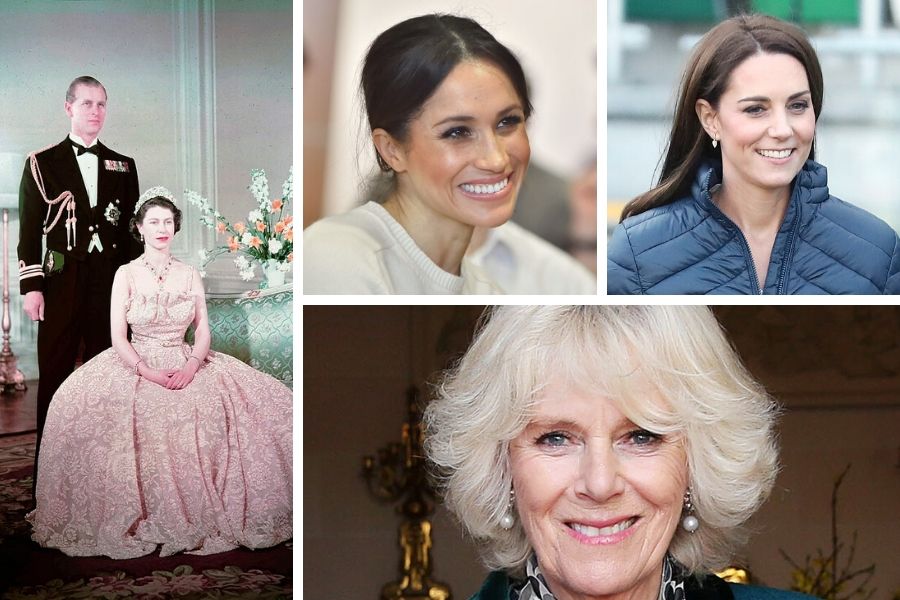 For the “Engagement Rings of the British Royal Family” featured image, above – see image credits bottom of article*

In this article, we take a look at the 10 most iconic engagement rings of the British Royal Family. With a vast amount of stunning family heirlooms, the Windsor dynasty is never stuck for sparkling accessories, and a never-ending line of bespoke jewellers are always honoured and thrilled to design and have pieces worn by the Royal Family – engagement rings being no exception.

The 10 Engagement Rings of the British Royal Family

The most recent headline-making British Royal engagement was that of Princess Beatrice to property tycoon, Edoardo Mapelli Mozzi, announced on 26th September 2019.

After a romance that’s lasted 11 months, Beatrice and Edoardo announced they are getting married in 2020.

Princess Beatrice’s ring is a diamond sidestone ring. This means it has a diamond solitaire in the centre and additional diamonds on each side of it.

The centre stone is a round brilliant cut diamond, at around 3.5 carats. We estimate its cost to be around £100,000.

The centre stone is displayed between baguette cut diamond sidestones. The setting is probably made of platinum.

Here is a ring inspired by Princess Eugenie’s:

Her ring seems to be inspired by her mother, Sarah Ferguson’s, engagement ring (see more about Sarah’s ring further down below).

Since the rumour is that the couple designed the ring themselves, this is very likely to be the case.

The unique gemstone in this ring is a padparadscha sapphire. The ring’s band is made of gold.

Princess Eugenie and Mr. Jack Brooksbank were photographed earlier today following the announcement of their engagement. The photographs were taken in the Picture Gallery at Buckingham Palace.

A padparadscha is a very rare type of sapphire. Its colour is a glowing blend of pink and yellow sapphire, creating a sparkling peachy colour.

The main gemstone in Eugenie’s ring is surrounded by 10 round diamonds, plus flanked by two pear-shaped diamonds that sit on the ring’s “shoulders” on the band.Padparadscha sapphires are very rare and extremely expensive. We estimate the ring’s value to be around £75K-£100K.

If you want to emulate Princess Eugenie’s style, but don’t quite have the budget for a padparadscha, a pink sapphire ring with diamonds could be the perfect choice for you.

Here is a ring inspired by Princess Eugenie’s:

Prince Harry’s engagement to actress Meghan Markle was made public in January 2017.

Certainly, it was the biggest Royal announcement in terms of media coverage and worldwide attention since Prince William’s engagement to Kate Middleton (more about that below).

According to Prince Harry,  it took him six months to design Meghan’s ring. It is a stunning diamond trilogy design.

The ring shows off a large centre stone with two smaller diamonds either side.

We estimate the ring’s worth at £150K-£200K.
The trilogy shape creates optimum sparkle, and represents the past, present and future.

It is set in yellow gold, a classic metal, said by Harry to be Meghan’s favourite.

Yellow gold is a particularly popular setting for diamonds, the yellow gold contrasting with the white, translucent colour of the stone for ultimate sparkle and shine.

Prince Harry and Meghan Markle after their engagement in 2017 ⏩ The Duke and Duchess of Sussex with their son in 2019 💙 pic.twitter.com/5eQh5EtmIE

The ring is made of up of one large diamond from Botswana, a place which is particularly special to the happy couple as it’s where they’ve both spent a lot of time together doing conservation work.

Also, the two smaller stones either side of the ring are from Diana’s personal collection so that the couple could include her in their big day – and according to Harry, for his mother to be a part of their ‘crazy journey’.

Thus Harry, much like his brother William, has paid a beautiful tribute to his late mother Diana.

Here is a diamond and gold trilogy ring in line with Meghan’s ring design:

The beautiful ring was William’s way of continuing his mother’s legacy and keeping her very much at the heart of such a big milestone in his life.

Beautifully encased by a halo of 14 glittering solitaire diamonds, this breathtaking ring caused a scandal at the time of Diana’s engagement:

Not having a unique, custom-made ring was unthinkable for a Royal engagement and some newspapers went as far as calling it a ‘commoner’s ring’.

This did not stop Diana choosing the ring she really wanted.

Being a fashion icon, her ring later went on to create a huge trend in gemstone engagement rings, revived again by Kate Middleton’s engagement to Prince William in 2010.

The Duke and Duchess of Cambridge, Prince George, Princess Charlotte and Prince Louis join The Queen and Members of @TheRoyalFamily to watch the @RoyalAirForceUK @RAFRedArrows fly past over Buckingham Palace, following Trooping the Colour, The Queen’s Birthday Parade. Trooping the Colour has marked the official birthday of the British Sovereign for over 260 years. Over 1400 parading soldiers, 200 horses and 400 musicians come together each June in a great display of military precision, horsemanship and fanfare to mark The Queen’s official birthday.📷PA @TheRoyalFamily #TroopingtheColour #BuckinghamPalace #QBP2019

If diamonds aren’t your first choice in engagement rings, a stunning sapphire is a superb, luxurious option, and a beautiful alternative for those looking for a less conventional ring.

Here is a sapphire ring very similar to the one worn by Diana and Kate:

When Prince Andrew proposed to Sarah Ferguson in 1985, he chose a gorgeous Burmese ruby, alledgedly to match her vibrant red hair.

The red ruby was surrounded by 10 sparkling diamonds in a floral style and set in stunning yellow gold.

Rubies make a fitting gemstone for engagement rings, especially for someone who is looking for a colourful, less conventional stone.

Rubies, like sapphires, are also incredibly tough, almost as hard as diamonds. So their heirloom quality is well suited to engagement rings worn daily for a lifetime.

Here is a ring very similar to the one given to Fergie:

Once belonging to the Queen Mother, Camilla’s enchanting engagement ring from Charles in 2005 is a beautiful family heirloom.

The classic piece is a large, emerald cut diamond with baguette diamonds either side, set in platinum for ultimate luxury.

It is one of the largest and most valuable of all the engagement rings worn by the Royal Family.

The Art Deco design of this piece gives it a distinct vintage elegance, particularly suitable for someone looking for a classic yet eye-catching style of engagement ring.

Below is a ring that is very, very similar to Camilla’s.  SOLD OUT! (However, if you find it a little over your budget, click here for an alternative option that is also exceptionally beautiful in an Art Deco style.)

It was designed by her future husband, Anthony Armstrong-Jones, to look like a rose bud.

Not only are rubies popular for their beauty and durability, making them an ideal gemstone for engagement rings. Their rich and vibrant colour is also synonymous with royalty and passion.

Here is a ruby trilogy ring inspired by and very similar to Princess Margaret’s ruby piece:

Her Majesty’s breathtaking 3-carat diamond engagement ring created headlines in 1947, when Prince Phillip of Greece and Denmark proposed to her.

The ring showcases diamonds from Philip’s mother’s tiara, Princess Alice of Battenberg, as is customary in Royal Families.

Phillip designed the round cut diamond ring himself. The large stone sitting between elegant side stones. The piece is set in platinum.

Never going out of style, adorning royals and celebrities the world over, diamonds really are a girl’s best friend.

They provide a classic and timless ring you’ll never want to take off. We evaluate its worth to be about £100K-£150K.

Here is a ring inspired by the diamond design worn by Queen Elizabeth II:

Little could stop Edward, Prince of Wales from marrying the woman he loved – even abdicating the throne in 1937 to marry her and causing a huge scandal at the time.

The lady in questions was none other than the US actress, Wallis Simpson.

This is another show-stopping gemstone ring, yet despite the controversy surrounding Edward’s abdication and marriage, it surprisingly not one of the most famous of all the engagement rings of the British Royal Family.

The staggering 19.77-carat emerald piece was made even more personal and romantic as Edward had the words, ‘We are ours now 27 x 36’, inscribed on the inside of the band.

The numbers were shorthand for the date Edward proposed to Ms Simpson on October 27th, 1936.

Here is an emerald ring inspired by that worn by Wallis Simpson:

During her reign in the 19th Century, it was customary for a female monarch, due to her high status, to propose to her prospective fiancé.

Queen Victoria’s engagement ring, by today’s standards, had a unique and somewhat curious design – a serpent.

It may seem like an unusual motif for a ring that represents love, but serpents at the time symbolised wisdom, loyalty and commitment.

Victoria’s ring had a mix of emeralds, rubies and diamonds set in it. Unique and with personal meaning to her, it was vibrant and colourful, like her much-adored personality.

Here is a stunning ring that emulates the serpent design of Queen Victoria’s ring:

In conclusion, the best Royal Family engagement rings are…

If there’s one thing we can learn from these Royal jewellery pieces is that the famous saying ‘beauty is in the eye of the beholder’ could not be more fitting.

Ultimately, the Royal Family members do what everybody else does: they choose an engagement ring that suits their character and style, and a befitting representation of love.

Which is YOUR favourite of the engagement rings of the British Royal Family?