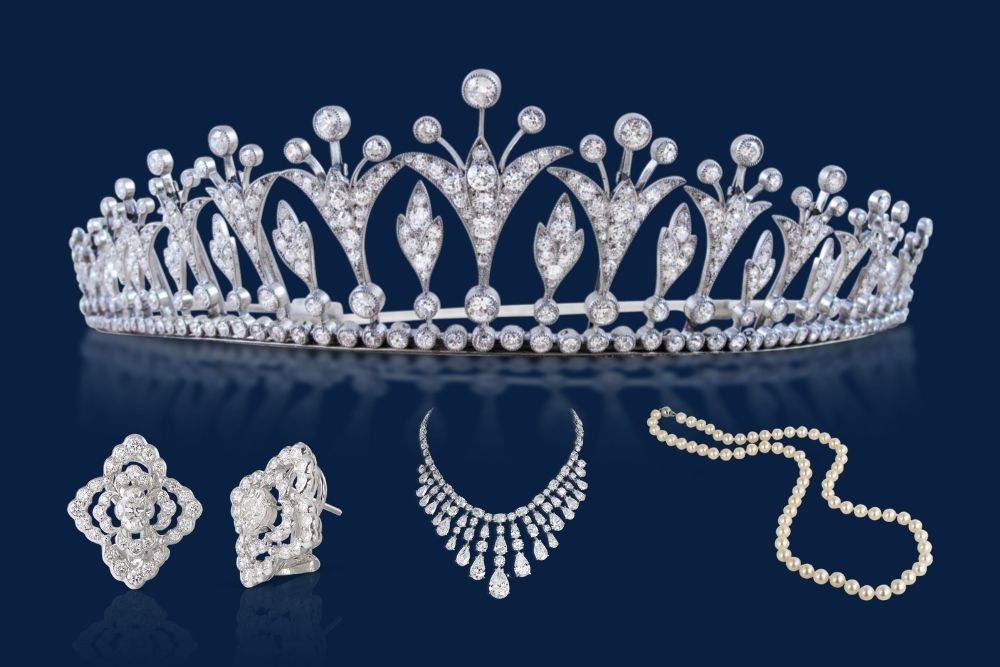 As huge fans of the TV series, we have compiled a list of the best Royal jewellery in The Crown on Netflix. Discover lots of juicy history and facts about iconic tiaras, regal necklaces and historic earrings – plus shop the looks and wear your own Royal-inspired jewellery!

VIEW JEWELLERY INSPIRED BY THE CROWN

Netflix’s accurate replica of the Lover’s Knot Tiara, pictured below, is a Royal heirloom in real life.

Queen Elizabeth II inherited it, but it originally belonged to Queen Mary. The piece is encrusted with a multitude of diamonds and features 19 hanging pearls set in silver and gold.

While Netflix’s tiara is a perfect copy of the original, the rest of the jewellery that was featured together with it in Season 2, Episode 1, Misadventure, is not historically accurate – and neither is the teal gown we see the Queen wear to the ballet where she first sees Phillip’s alleged ballerina paramour!

The ones that actor Emma Corin is seen wearing in the snap below from Season 4 (where she reenacts Princess Diana’s 1989 solo trip to New York) are replicas, along with the white gown and matching bolero jacket.

We believe that the earrings in The Crown were meant to depict the elegant pearl-and-diamond drop earrings that real-life Diana received as a wedding gift from the London jeweller, Collingwood, pictured above.

3. The Queen’s sapphires when she meets Jackie Kennedy

The Queen is depicted in Season 2 wearing a blue dress and colour-coordinated blue sapphire jewellery that include earrings, a necklace and a brooch, as she meets the US President, John F. Kennedy, and his wife, Jackie.

We are not sure if the jewels are an exact replica, but we believe that they are at least a nod to one of The Queen’s favourite sapphire parures (a set of jewels intended to be worn together) which was a wedding gift from her father, King George VI.

We know that Queen Elizabeth II has altered some of her sapphire jewellery over the years, making her father’s gift necklace shorter and adding a pendant, so it’s possible that the necklace seen on The Crown is how the set looked originally.

Among the most realistic jewellery copies, and as one of the best Royal jewellery in The Crown on Netflix, the tiara pictured below is a replica of the Queen Mary’s Fringe Tiara.

It was commissioned by the Queen’s grandmother. Her Majesty wore it – and famously broke it – in real life on her wedding day. Apparently the mishap occurred as Elizabeth II was handling the heirloom just before the wedding ceremony. Therefore, it had to be hastily repaired in situ by Garrard & Co Jewellers.

(In the official wedding photos, if you scroll down to number 4 below, and if you have a keen eye, you might spot the slight gap in the tiara!)

Since her wedding, the real Queen has occasionally worn the tiara at formal events. She even wears it in her New Zealand Diamond Jubilee portrait, below, with the matching Fringe Necklace.

In The Crown, the Queen’s outfit has the tiara paired with a teal ballgown and diamond necklace, bracelet and earrings, which although fictional, are simply stunning.

5. The Queen’s emeralds while she dances in Ghana

The Grand Duchess Vladimir Tiara is said to be another one of the real-life Queen’s favourite pieces.

It was commissioned in 1874 by Duchess Vladimir and smuggled out of Russia when the duchess fled her country during the Revolution of 1918.

The duchess’ family sold the tiara to Queen Mary, who had it altered so that it could be used to display either emeralds or pearls. Queen Elizabeth II later inherited the tiara and since then, has worn it regularly.

In The Crown, the depiction of her wearing the tiara with matching emerald earrings and necklace during the dance with the Ghanaian president, Kwame Nkrumah, in 1961, is historically accurate.

On her wedding day, the real-life Diana Spencer wore the Spencer Tiara which had belonged to her family since the 1700s.

The pear-shaped diamond drop earrings that she wore on her wedding day actually belonged to her mother, the Hon. Frances Shand Kydd.

Both were accurately replicated in The Crown, along with Diana’s exquisite 1980’s style wedding dress.

Margaret Thatcher is a controversial character in history, but there’s no denying that The Crown got Gillian Anderson’s Maggie-look down to a tee. Including her pearl button earrings that appear regularly throughout Season 4.

Pearl earrings are, in fact, a staple when it comes to powerful women’s formal wardrobes. The Queen, Kate Middleton, Princess Diana, Michelle Obama, Rhianna, Kamala Harris and many other famous women have often been seen wearing pearl earrings during state dinners or red carpet events.

8. The Queen’s double string of pearls

In the very first episode of The Crown, we saw the Royal Wedding of Princess Elizabeth to Prince Philip.

Apart from the Queen Mary’s Fringe Tiara (which we covered above at number 4), the Queen’s pearls are her most famous bridal jewellery piece. Claire Foy wears a similar pair in The Crown, shown below.

The real-life double string of pearls The Queen owns (and has worn on numerous occasions since her wedding) in fact consists of two separate necklaces. They are the Queen Anne Necklace and the Queen Caroline Necklace, both wedding gifts from her parents.

The Diamond Diadem is a real-life crown that was originally made for Mary of Modena, the Royal consort of King James II, to be worn at his coronation in 1685.

It is made with diamonds and its value is estimated at more than £20 million today.

Below, Claire Foy is shown playing the Queen, wearing the Diamond Diadem crown together with a white gown and the Diamond Fringe Necklace for an official portrait.

Alongside these items, in the series, the fictional Queen wears a large pair of pear cut diamond drop earrings which we believe are not exact replicas.

10. Last but not the least… THE Crown

This is the most stunning piece in our list of the best Royal jewellery in The Crown on Netflix: St Edward’s Crown is the most important of all the British monarchy’s crowns.

It is only used for crowning kings and queens. It was originally commissioned for the coronation of Charles II in 1649.

As you can see below, the replica that Netflix made for The Crown is a simply stunning copy of the original which is made with diamonds, sapphires, emeralds and rubies set in solid gold.

VIEW JEWELLERY INSPIRED BY THE CROWN